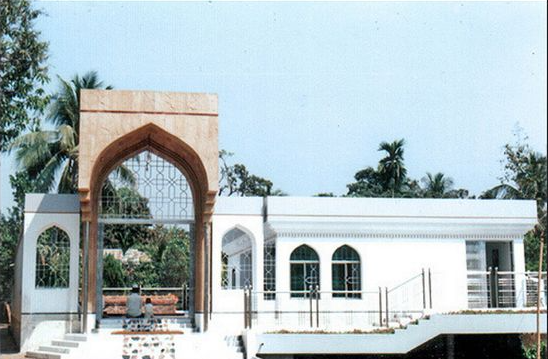 Moulana Waliullah of Babu Nagar Village was appointed as his house tutor. After sometime Moulana Hafez Qari Tofazzal Hossain of Mirzapur village was appointed as his house tutor and he learned and studied valuable books on religion in Arabic, Persian and Urdu. Besides text books he also studied different books written by eminent Islamic thinkers and acquired deep knowledge over the Holy Qur’an, Al-Hadith, Fiqh, Philosophy and so on. Side by side with religious education he also studied books and papers in Bengali and used to read news papers, journals, magazines etc. in Bengali regularly’ Hazrat Gausul Azam Maizbhandari (K) could not live for a single moment without seeing him. Hazrat Gausul Azam Maizbhandari (K) called him ‘Dela Moina’ (talking bird) out of affection. Hazrat Moulana Syed Aminul Huq Wasel Miazbhandari (R) is his Pir-e-Bait (guide who showed the path of divine love) and Hazrat Gausul Azam Maizbhandari (K) and Hazrat Baba Bhandari (R) are his Pir-e-Tafaiuz (guide who gave divine blessings). Hazrat Baba Bhandari (R) is the father-in-law of Hazrat Delawor Hossain Maizbhandari (R).

Hazrat Delawor Hossain Maizbhandari (R) is the only personality who analyzed and explained the true nature of Maizbhandari Philosophy / Tariqa in detail. He wrote ten valuable books on Maizbhandari Philosophy in Bengali. His books, ‘Belayet-e-Mutlaka’ (translated into English) may be regarded as the master-piece on Maizbhandari Philosophy. In 1949 he established Anzuman-e-Muttabeyin-e-Gaus-e-Maizbhandari (an organization for the followers of Maizbhandari Tariqa) to circulate and spread the essence of Maizbhandari Tariqa, to establish social justice and to render humanitarian and welfare services to the community of nations.
He was very pious, humble and benevolent. His life-style was very simple. He loved all people irrespective of caste, creed and religion. He used to write ‘Khademul Fokara’ (servant of the poor or the service-provider for the poor) before his name.
He was completely dedicated to his master Hazrat Gausul Azam Maizbhandari (K) both in speech and action. He was totally committed to the observance of Shari’ah. He prohibited his sons / followers from building any tomb / domes or minarets over his holy shrine / grave. He departed from this mundane world on Saturday morning, January 16, 1982 A.D.; Magh 2, 1388 B.S. at the age of 90. He left five sons and six daughters behind him. And epitaph has been in scripted on the wall of his holy grave in the following way :
“The hard structure of the human nature is your drinking pot. The vast body of colorful earth is your garden of flowers.”