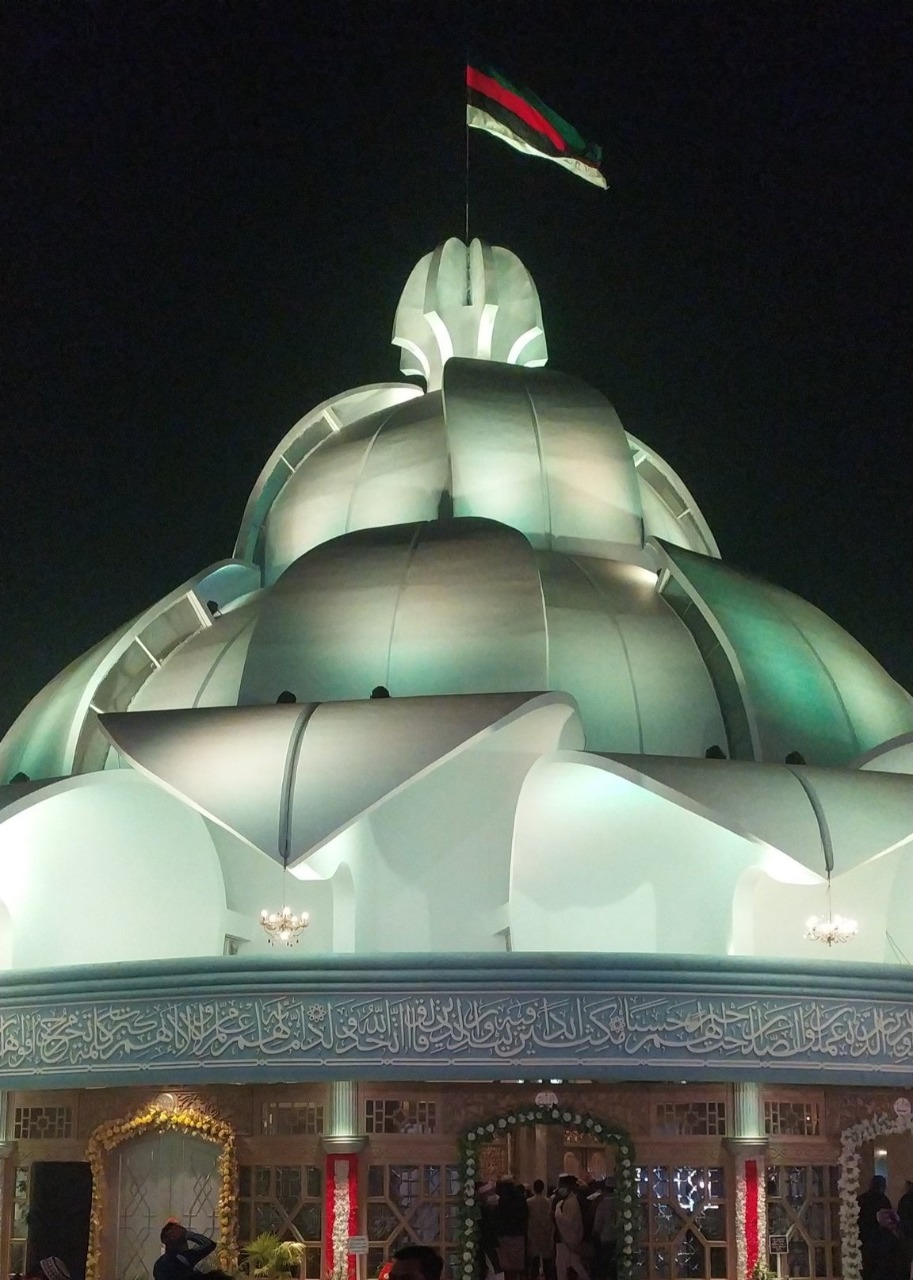 Hazrat Shahanshah Syed Ziaul Huq Maizbhandari (R) is regarded by his disciples and followers as a ‘Marajal Bahrain’ (unction of two streams of waves) in Maizbhadar Darbar Sharif. He played active role in popularising Maizbhandar Darbar Sharif in the contemporary world through his different mysterious actions and wise sayings so as to contribute to the global peace and harmony. Hazrat Ziaul Huq Maizbhandari (R) was fortunate enough to have the endless blessings (Faiz) from three great mines of divine power namely, Hazrat Gausul Azam Maizbhandari (K), Hazrat Baba Bhandari (R) and his father Achi-e-Gausul Azam Khademul Fokara Hazrat Syed Delawor Hossain Maizbhandari (R). He was born on Tuesday morning, December 25′ 1928 A.D.; Poush 10, 1335 B.S.; Rajab 12, l347 Hijri. On the 7th day after his birth news named as Syed Badiur Rahman. Hazrat Gausul Azam Maizbhandari (K) did not approve this and he asked his grandson Hazrat Delawor Hossain Maizbhandari (R) in dream to keep the name of his son as Syed Ziaul Huq instead of Syed Badiur Rahman. So, he was finally named as Syed Ziaul Huq (R). At the age of Hazrat Ziau’l Huq Maizbhandari (R) got his elementary education on Kalema and Arabic alphabet from his house tutor Moulavi Mozammel Huq. Then he was admitted to Maizbhandar Ahmadia Junior Madrasa and he studied upto class three in this Madrasa. After that he was admitted to Nanupur Abu Sobhan High School in class five which was adjacent to Maizbhandar Darbar Sharif. He studied upto class eight in this school and then he was admitted to well-reputed Collegiate High School in class nine. In 1949 he passed the Entrance Examination and got himself admitted to Chittagong Government College where from he passed I.A. examination. After that he was admitted to Kanungopara Sir Ashutosh College in B.A. Class. In 1953 during the third day of his B.A. Test examination he became in different and abnormal for sometime and came out of the examination hall submitting his answer script as blank. Thus his institutional or formal education came to an end through this mysterious event. After this event he came straight to Maizbhandar Darbar Sharif and began to undergo spiritual trial and tests (Riajat). He began to pass his time in deep meditation to God giving up the pleasure and comfort of the mundane world. He remained unfed and unslept for days together. Sometimes he used to dive in the water of the pond during the bitter cold of the winter for many days. He used to remain secluded in a single room with door closed from inside for days together breaking all the relations with the mundane world. Once while his father was thinking about his son in a slumber at night he found Hazrat Gausul Azam Maizbhandari (K) beside him in a dream saying, “Why are you so anxious? Put my green long shirt (jubba) on him.” His father put the same on his son accordingly with no loss of time. Since then Hazrat Ziaul Huq Maizbhandari (R) became completely cured and quiet. He was a Majjub-e-Salek saint. He used to pass most of the nights sleeplessly and to travel through hills, forest, sea etc. without any set program and without informing anybody.

He was married to Mrs. Syeda Monwara Begum, the youngest daughter of Late Badaruzzaman Chowdhury (Badan Sikder), a renowned Zamindar of Dantmara of Chittagong district on January 28, 1955. He has five daughters and one son. His only son Hazrat Syed Muhammad Hasan Maizbhandari (M.J.A.) is an M.A. in English. He is the Sajjadanashin of Gausia Huq Manzil, Maizbhandar Darbar Sharif and was President of the Maizbhandari Academy. The followers of Maizbhandari Tariqa and devotees of Hazrat Ziaul Huq Maizbhandari (R) are increasing day by day due to the able leadership, sagacity, foresight, intellect, personality and farsightedness of Alhaj Syed Muhammad Hasan Maizbhandari (M.J.A.). People call him “Mowla Hujur” out of love, affection and respect.

Hazrat Syed Ziaul Huq Maizbhandari (R) caused many miraculous and mysterious events to redress the sufferings of the common mass and to make the people aware of his divine and spiritual status. Some of his famous sayings may be stated here in the following for knowledge and the benefit of the global humanity :

(a) “Eat permitted things (Halal), offer prayer (Salah) and remember Allah every now and then.”

(b) “If you like to understand me, go through the Holy Qur’an.”

(c) “Maizbhandar Sharif is an ocean. Do not think it otherwise.”

(d) “My office is the Baitul Muqaddas of the East- It is the house of Allah. It is the centre of Union of all nations.”

(e) “My divine power of actions spreads throughout the boundary of Rahmatullil Alamin (blessings of the worlds, i.e., Prophet Muhammad (SAW))

(f) “If you spend the money meant for Hajj for the benefit of the distressed people, you will get the reward of Great Hajj (Hajj Akbar).”

(g) “A society can not live without co-operation.”

Hazrat Syed Ziaul Huq Maizbhandari (R) was a perfect model of ‘Rabubiyat’ both in action and spirit. He was a philanthropist. He loved all people irrespective of sex, caste, creed and religion. Even the ugly owl was not deprived of his love and affection. He had no greed for mundane things. He burnt many currency notes into ashes. He asked the driver to drive the car with water and without any diesel or petrol and surprising enough, the car ran smoothly with water as a substitute for diesel or petrol. This great saint departed from the mundane world at the age of 60 on October 12 at 12-27 A.M., 1988 leaving his son Alhaj Syed Muhammad Hasan Maizbhandari (M.J.A.) as his competent successor and only heir to his divine throne behind him. Hazrat Syed Ziaul Huq Maizbhandari (R) is now invisible physically, but very much visible spiritually both in thoughts and actions. Because, ‘the saints can never die.’